Day 3 includes climbing the 905 metre high Ironbound Ranges on the way to Little Deadman’s Bay, just over 12 kms away.

We started out early to avoid the heat if the weather served up a repeat of the previous day’s scorcher, but needn’t have worried as conditions were overcast and cool. 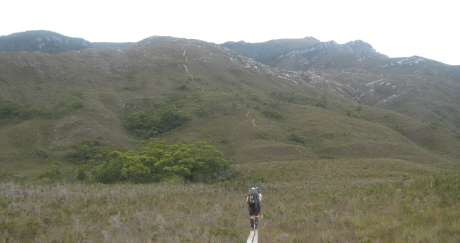 Leaving Louisa River for the Ironbounds

The Ironbound Ranges is a fairly intimidating sight as you head up the steep steps – most of the 905 metre climb happens in just 5 kms.

That’s a decent incline by any measure. 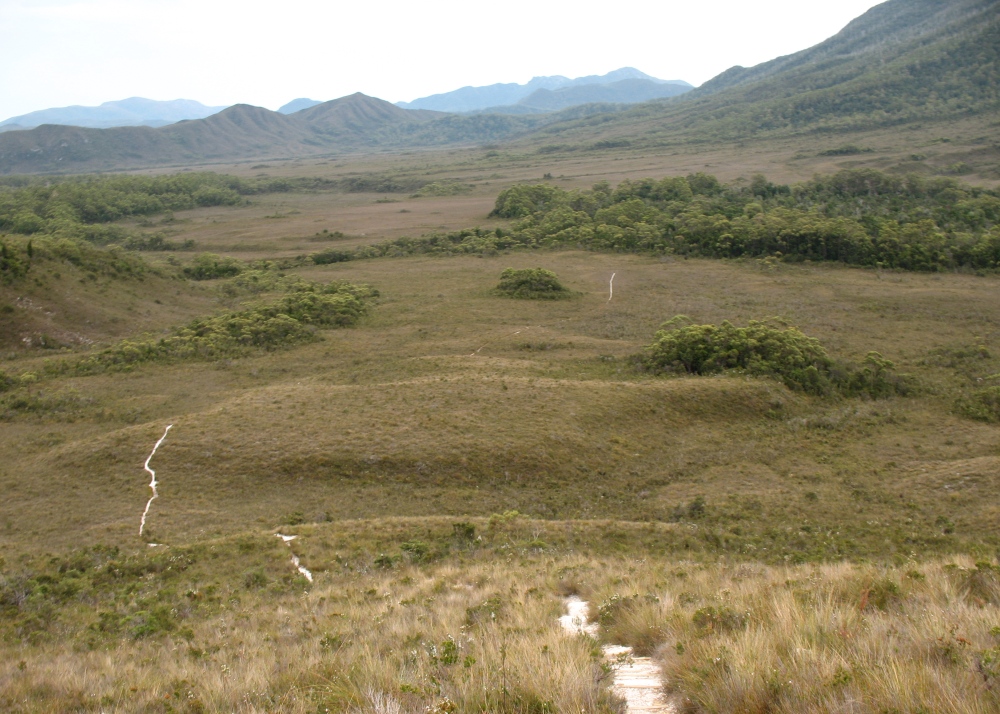 There’s a couple of times on the initial climb where you look up and see a crazy steep part and think there’s no way that’s your track…..except when you get there and it is.

Taking a rest up the Ironbound Ranges

Surprisingly the steep parts look worse than they actually are and you’re up them before you know it.

Just when you think you’re at the top of the Ironbounds, another hill appears.  And then another.

There’s a bit of up and down before you finally reach the top. 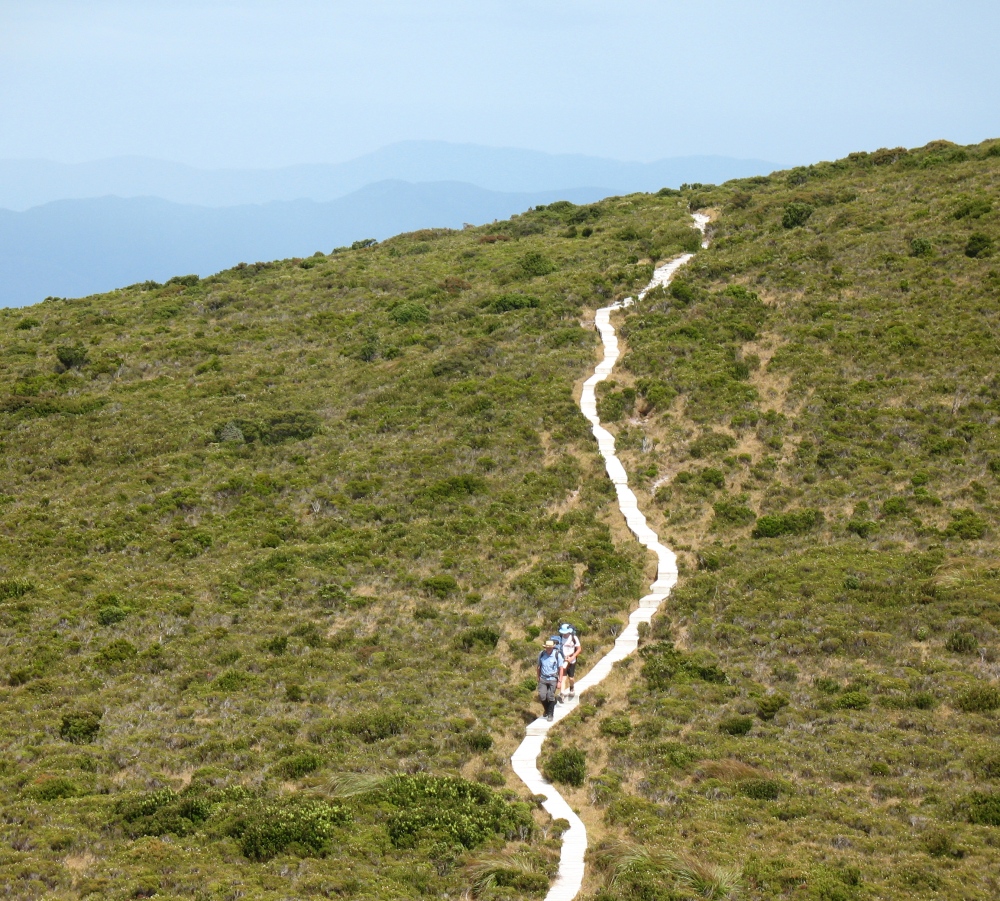 What goes down must come up – Click for bigger image

Then in the distance you see yet another big incline with a white path snaking it’s way upward and you think that mustn’t be your track.

It is – when you think you’re at the top, think again!

Boardwalk On Upper Parts Of The Ranges

Much of the upper climb is boardwalk, which make things a lot easier than they otherwise might be.

We found the Ironbounds not as difficult as the much smaller Red Point Hills from the previous day.  There were 2 main reasons for this:

At the top of the Ironbounds we were buffeted by incredibly strong winds.

By strong winds I mean we actually looked above us because the noise of the wind sounded like a jet engine was a few metres above us.

Weedy Bloke From WA Flung Like A Rag Doll!

And Neil, 75 kgs with a 22 kg pack, was actually picked up and flung aside on a couple of occasions.

Be A Boy Scout At The Top Of The Ranges

Be prepared for anything on the top of the ranges – we had a half decent day and it was still pretty treacherous.

A nice walk through along boardwalk and then covered forest takes you 1km down to Ironbound High Camp – a great spot for a rest, lunch and to refill the waterbottles at the sparkling creek.

From there it’s a 7 km or so walk down, down, down to Little Deadmans Bay.

The track is very rough, steep and wet in parts. 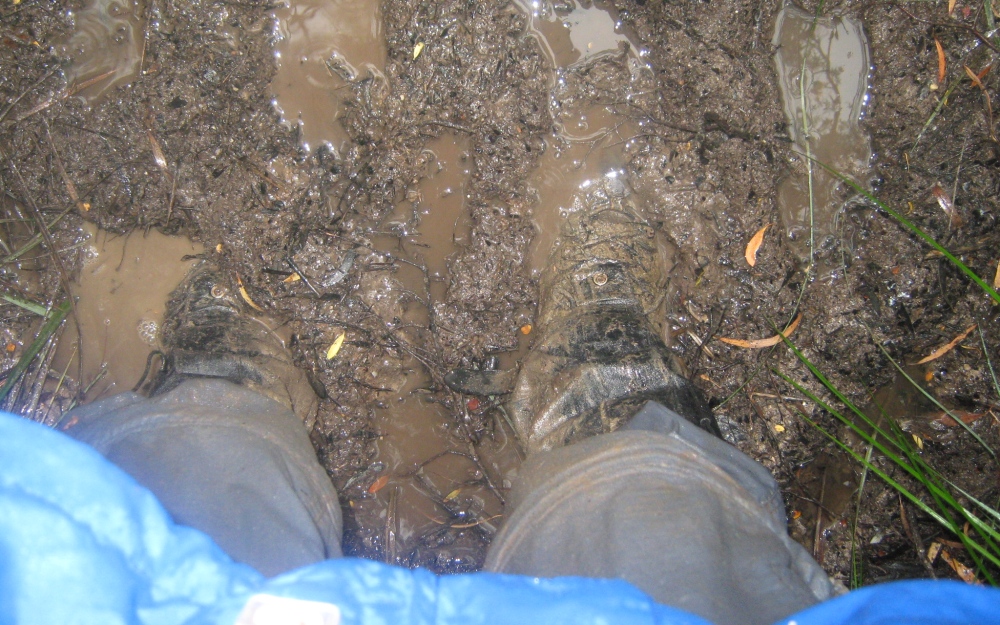 Track conditions can get a little muddy

You’ll find yourself clambering over trees, sliding down rocks and getting down on your hands and knees to crawl under fallen trees.

As you hit the lower levels you’ll come to Ironbound Low Camp – a small campsite that our map told us was about 3.5 kms from Little Deadmans Bay.

After a short rest here we headed off for Little Deadmans Bay – it seemed to take forever and be way longer than 3.5 kms.

It was an easy walk through light forest and across a freshwater creek before we came to the rather extensive campsite of Little Deadmans Bay.

The campsite is on the western side of a nice sized creek for fresh water.  It includes a firepit and a sign telling you it’s one of the few places where you can have an open fire. 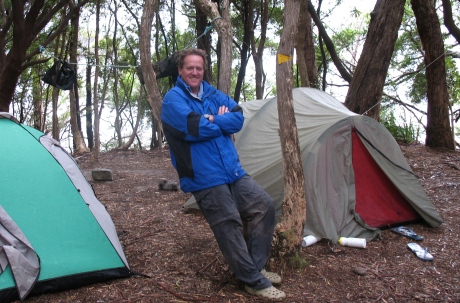 It was a long day of steep climbs and rough downhills, but the cooler weather meant it wasn’t as tough as the walk over the much smaller Red Point Hills.

If you do the Ironbounds in clear, hot weather then I suggest you start very early to avoid the sun as there’s no shade getting to the top.